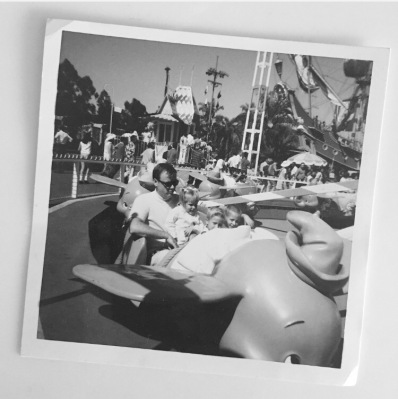 I look at this unframed black and white photograph of my Dad, my brothers and myself every day. It’s wedged on a shelf near my sunscreen on my bathroom counter. It reminds me that in as much as life is ever changing, some things will always remain the same.

These days, the Sailing Ship Columbia, is docked in Frontierland, and those aboard won’t see 12 flying elephants during their voyage, nor are guests of the Magic Kingdom likely to have a Disney Day with small crowds reminiscent of 1969. These are some definitive changes. But those brave enough to face the stroller-wielding families in Fantasyland will still witness Daddies nestled beside their littles in miniature mammalians while Mommies capture the moment on film.

And on the faces of many of these men, in the picture before the picture that will be posted to social media, there will still be that look of discontent. Throughout time, there have been people who have struggled with being content.

From the day of my first memory, which was around the time of this photo, my Mother has whispered to me, “You and your father are just alike..”

I’ve often wondered if Mom could really see that, or if she created the similarity with her whispers. Either way, she was right. I see it when I look at this snapshot of him with his children. It’s those uncaptured thoughts plummeting the heart downward when everything is–in actuality–just  fine. It’s struggling to be content with the same things we will one day long for; he and I cannot be alone in that one.

We aren’t bad people, and this trait isn’t a flaw incapable of being used for good. Inasmuch as the lack of contentment can lead to wandering and depression, the struggle to acquire contentment is also the core of desire and creativity. My father wanted more, and he allowed this hunger to drive him to build and create things for our family. Being discontent also leads us to the cross, time and again. It’s the desire to have the ache fulfilled from the inside that draws us to the only One who can. Thankfully, that never seems to change either.

Despite the anhedonia-like undertones that could be ascribed to this post, I’m not trying to be disrespectful; I love my father fiercely. I just don’t know how to write honestly about my parents, my childhood, or my life and not acknowledge the good, of which there was much, without also remembering the hard. I have to write what’s true, it’s that part of me that’s just like my dad.